Here’s our map showing the route we took a few weeks ago taking in the Northern points on the Irish Photo Rally list. We took in points ‘B’, ‘C’, ‘D’, ‘E’ and ‘F’ on the Sunday, and then the remaining points on the way home on the Monday.

The Benburb Valley Heritage Centre, an old, linen weaving mill, was our first point. Apparently the mill has been restored and visitors can view the machinery inside as well as a couple of steam engines. This beautiful, historical site badly needs a web presence with opening times and visitor information as the only piece I could find on it (apart from minor references) was on the website for the European Route of Industrial Heritage (erih.net).

We took the opportunity while we were at the mill to have our lunch that we’d packed that morning. It’s a lovely place to stop beside the canal and we were lucky with the weather that we were able to sit out.

Update: I eventually found some information on opening times on the Frommers website. It’s probably best to phone beforehand though to check the times for sure.

After lunch we drove on to Armagh, passing through Cookstown where I was in awe of the overhead banners on the streets.

Passing through Bellaghy we stopped to take photos of Seamus Heaney’s HomePlace and the church and graveyard.  Seamus Heaney, Irish poet, playwright, translator, and winner of a Nobel Prize in Literature lived in Bellaghy as a child and chose to be buried there when he died.  The visitor centre is quite a modern structure and, as you’re passing, you can’t help but notice it.

Heaney’s grave is a modest, unobtrusive plot set in a quiet, secluded corner of St. Mary’s graveyard. I can only imagine that it’s the way he would have wanted it, as it’s the perfect place for some quiet reflection.  The inscription on the headstone formed part of his Nobel Prize acceptance speech and comes originally from his poem ‘The Gravel Walks’ (see Independent.ie for further info).

We had an interesting trip to this photo point.  Diversions and road traffic blocks indicated that there was something big going down, and so we did our best to follow alternative directions given by the local police who were stopping traffic going through.  They told us there was a parade due to take place.  Well, naturally we didn’t want to be caught up in the crowds, so we did our best to pick our way along minor roads through housing estates, only to find ourselves emerging on the road where the parade was due to start.  It was a real ‘oops’ and ‘feck’ moment! As the parade hadn’t started and people were only gathering at the sides of the street with their…flags and bunting…we made a break for it up the street between them and out the other side.  I did *not* give the pillion salute as we drove by.

When we got to the sculptures (Sam and Roisin), we found a big portable traffic light in front of them so the bike was parked opposite and I got light and all in the photo.

Apparently the Ponderosa Bar is really the highest pub in Ireland according to The Belfast Telegraph, which means it sits higher than both Johnnie Fox’s in Glencullen, Dublin, and the Top of Coom in Kilgarvan, Kerry.  However, an article by Crystal Travel & Tours would seem to throw that theory out of the water, providing information that would give a ‘peak’ advantage to the Top of Coom pub. As long as they all continue to serve coffee and food, I’m happy.

From Ireland’s highest pub to its smallest church, there are some beautiful views from this dainty little chapel.

I found an article that described how the stone caps on the pillars had been stolen in 2014 so that inspired me to go searching for photos of the church with the original pillars.  Thanks to Flickr user, colin.boyle4, the original handmade stone caps can be seen in a photo he took in 2011. 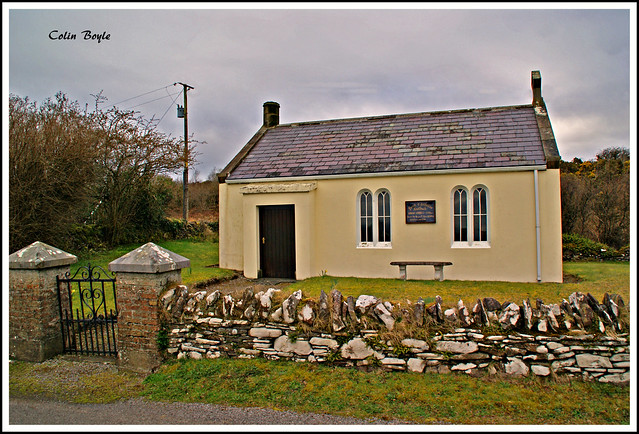 It’s not hard to imagine how dismal and dreary this institution must have been when it functioned as a workhouse.  Luxury accommodation it was not.  There are lots of photographs of the interior on the Bawnboy Workhouse website. It’s an older style website but the photos are interesting.

I know it seems like we were working in reverse order here with the numbers, but that’s the way the route went in order that we could start travelling back down the country towards home again.  It was about six in the evening when we arrived at the Bawnboy Workhouse, although we’d made great time taking in the previous photo points as well as a stop for lunch and a coffee/icecream stop or two. It was time to get off the road, check into our B&B and get some dinner.

We weren’t expecting this at the B&B – a four poster bed in a room called ‘The Honeymoon Suite’.

James (Jimmy) Gralton was born in Effrinagh in 1886 and emigrated to the US in 1909.  He returned to fight in the Irish War of Independence and in later years led the Revolutionary Workers Group in Leitrim.  He ran a dance hall (Pearse Connolly Hall) in Effrinagh which attracted violent protests by the Catholic clergy, one of which resulted in a shooting incident. Following this incident, in 1933 he was arrested and deported without trial, becoming the only Irish man to be deported from independent Ireland.  ‘Jimmy’s Hall’ is a movie made by British TV/Film director, Ken Loach, who was inspired by the story of James Gralton. The monument at Effrinagh was unveiled on the 3rd September 2016 by President Michael D. Higgins.

We arrived at Albert Lock at the right time (for a change).  A boat was just passing through when we arrived so we got to see the whole operation.  I always thought it would be a lovely relaxed way to see the country but I’m not sure I’d have the patience to be waiting around on locks to be opened and chambers to fill with water so that levels are right. And then I’d want to get on and off the boat whenever I see something interesting.

These people seemed to be enjoying themselves though.

Ah, I know it’s not a photopoint, but surely it deserves a heading of its own?  Sure, there’s no show like a Joe Show! We were passing through Mullingar and I had to have a dance.

Our last photo point before we went home – The Hill of Down Post Office in Meath, located on the Royal Canal, and next door to J. Moran’s pub.   It’s worth noting that this old style pub and post office is on the route for the National Famine Way.

We have a few more points to get in before the deadline which is midnight on the 7th of November.  If you’re a biker or a pillion, you still have time to take part.  It’s a great way of seeing places that you’d never have thought of visiting, and a good way to meet up with others.  Take a look at www.irishphotorally.ie and have fun!

Biker On The Back

Glasnevin cemetery. A final goodbye to my beloved

Day 7 of #100daysofwalking. A bit of colour in the

A good start to #100daysofwalking and #hillwalking

"The Forge" on the Grotto Walk, Glenshelane, #Wate

Walking the old roads over the hills in the Comera

A heavy mist on the mountains, dew drops on the gr

#Rainbow over Piltown/Kildalton this morning. Mayb

My actual face for the majority of 2020. Tonight i

I spent a couple of hours today learning to set up

Delivery of garlic and seed potatos this morning.

The tree is up. Since John died, I've put up a whi


Error: API requests are being delayed for this account. New posts will not be retrieved.